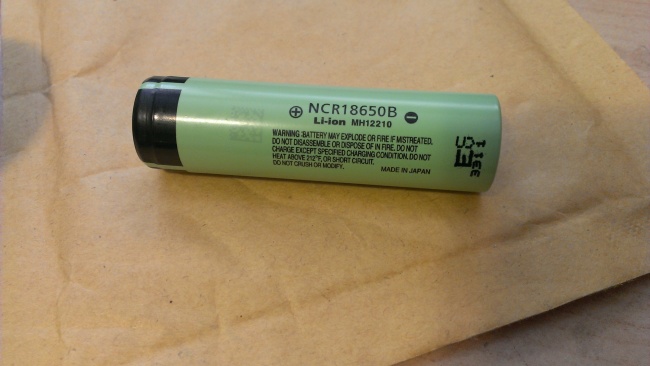 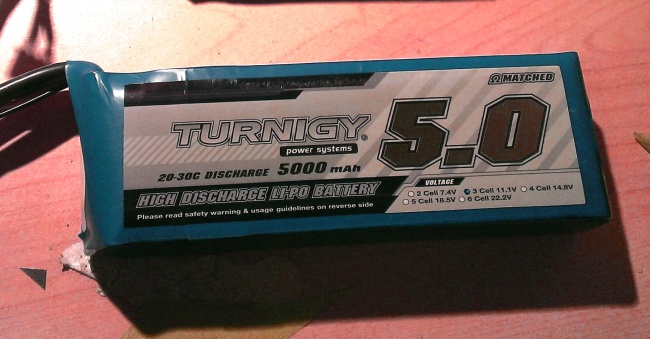 I have about fifty brand new li-ion cells (18650 format) in my lab and I am tempted to build another battery pack for my bike .

The cells in question are 25 pieces of LG ICR18650C2 ( 2800mAh) and 25 pieces of Panasonic NCR18650B (3400 mAh) . 50 cells are not enough to make a battery composed of 20 cells in series , because of the low discharge capacity ( C rating). To buy more cells would be the easiest solution , but considering shipping , customs and cost of the cells (at least 2-3 dollars per cell with a minimum order of 100 pieces) is not a cheap solution.

Looking on the net, a well-known seller of RC toys and products ( HK) has very affordable prices for lithium- polymer cells. There is also a warehouse in North America and the shipping is not that expensive compared to the li-ion 18650 cells.

So I decided to mix the two different battery chemistry’s , Li-ion and  Lipo to get a battery with adequate capacity ( about 8- 10Ah is what I aspire to ) and discrete C -rating. On average I use between 4A and 10A on my bike on a level surface , with peaks of 35A (rare) when I am in a hurry.

I could not find any feedback on the feasibility and the behavior of the cells, so I decided to do some testing on my own.

The two types of cells have the same charge voltage ( 4.2v , 4.1V if you want to conserve battery life, prolonging the useful life cycles ), but different levels of low voltage , Lipo does not like to be discharged under 3.4v ( under load) , while with the li-ion can reach 2.5v ( under load) .

I have done several tests and the LVC mixing the two cells  (li-ion  and lipo connected in parallel) seems to be 3.0v . This way, at the end of the discharge LiPo cells are still cold woth no signs of “stress” , while the li- ion batteries are hot as usual , a typical behavior of this chemistry.

How  the tests were performed.

The cells were charged all at the same voltage and then connected in parallel . This way I obtained an 11.2Ah nominal battery . Then the battery was subjected to a discharge test using the CBA4 battery analyzer .
The discharge tests were performed at 5A, 10A and 15A continuous , stopping the discharge at 3.0v .

Here are the results :

Let us look at the behavior of a battery composed of only 18650 cells with similar capacity (11.4 Ah nominal vs 11.2 Ah  nominal), discharged at the same current with the cutoff at 2.5v :

Now, we directly compare the test results of mixed cell with the “pure” li-ion cell of similar capacity.

As can be seen from the graphs the lipo cell contribute for the most part of the graph, trying to limit the voltage sag. When they are at the end of their capacity (3:45-3.60v on the graph), you can notice a drastic drop in voltage because only cells li-ion are contributing to the load. 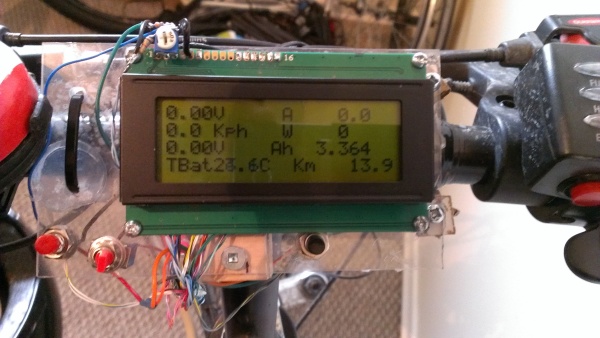 It’s finally warm here in Canada and I have started to use my e-bike to go to work. I introduced some improvements to keep things tidy and easy to use.

Starting with my e-bike computer I used an old printer cable (with many cores) to re-wire the connection between the LCD screen and the main board. I also added a toggle switch that powers off the unit while I am at work or when the bike is not in use, avoiding battery draining. 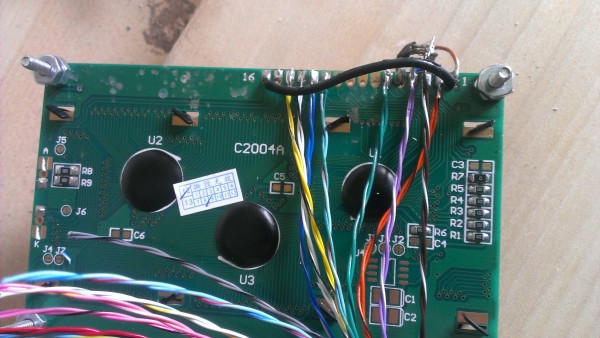 Everything looks so much tidier now!

I also re-wired the main board with 10AWG cables.

The bike now uses the Hybrid battery (see previous post), 54V nominal and about 9.5Ah (with 7.5Ah of usable capacity to preserve cycle life). I was able to shrink wrap the battery in black PVC tubing, making it safer and more professional looking.The battery is secured to the frame with “backpack” straps. 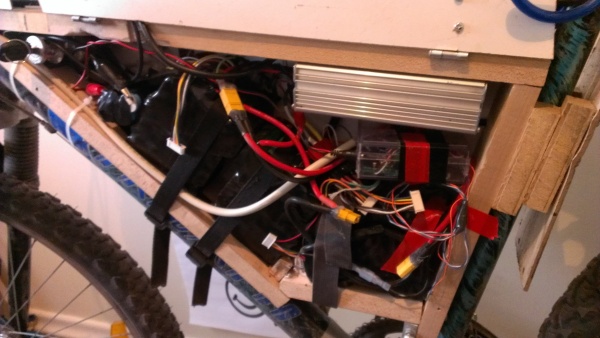 I am still working to improve the bike.

Next things to do:

I am also working on a “cell balancer”, I have done a few tests and I should be able to have a pcb ready for more testing next month..I will keep you posted!

Here is my electric bicycle conversion.

I started with a normal mountain bike, quite old I have to say, I guess it’s more than 10 years old. 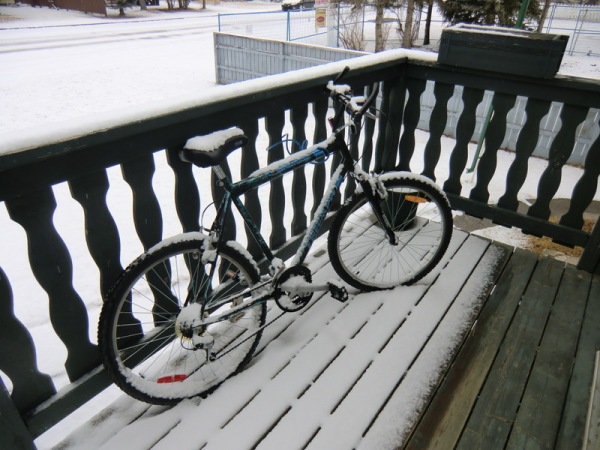